So my 219 OS struggles continue and I wanted to give an update and hopefully get some more information. As discussed in this post: https://vandercookpress.info/2012/05/219-os-carriage-latch-question/ the wooden carriage latch had worn away enough that it wasn’t holding the cylinder carriage back at the feedboard. After some time, I came to the conclusion that it was contributing to registration issues I’ve been having with the press, due to their being wear on the rails at the feedboard which cause the paper to be a bit off in one direction or another depending on the exact location of the carriage when grippers are lowered.

As of this week, I should finally have a replacement wooden block. I was worried about the spring that holds the block but realized I could just take off the entire unit and replace the block without unscrewing the spring.

That should help. I also noticed two more things, in the middle of the springs that stop the cylinder when coming back to the feedboard is a wooden stop with a set screw, and on the carriage itself, where it would hit the springs, there’s a piece of metal screwed in.

I think it’s not enough make sure the wooden stop holds the cylinder back, but with that metal strip adding material to the where the springs hit, it helps make sure the cylinder is pushed forward enough against the stop, so in the end, it has a consistent and secure position. I’ve attached photos below of the wooden stop, and the metal bar (with some makeshift paper we put on to see if it would help, it did).

Finally, the realization of why this was effecting registration so much…when the cylinder is in the middle of the press bed, there is no lateral play or wear, it is pretty tight. But when it’s back at the feedboard, you can easily jerk it the equivalent of a point pivoted one way or another. You can also feel wear to the bottom of the rail where the impression wheel rests. If the impression wheel is tightened back their so it wouldn’t move, it would be too tight for the rest of the printing cycle. This play is most noticeable when the cylinder latch and springs aren’t holding the carriage at a set position, I think. The only differences I can tell of the the carriage at the feedboard vs along the bed is the wear to the rail, but also the lack of the gear that turns the rollers, does that help keep the cylinder bearer from moving laterally?

What I wonder is…is it possible to build up the rails back at the feedboard? I know it’s not advisable to do it along the press bed because you’ll get inconsistent inking, but back at the feedboard the rollers aren’t over the form yet. I was wondering about something like Devcon Liquid Steel applied to the bottom rail a bit back at the feedboard. If that wear is causing the problem of too much play, then it seems like that may be a solution.

If the design is such that it’s actually the roller rail that keeps the cylinder from moving, then my only hope is that by fixing the carriage latch it will keep things in a consistent position when feeding.

Once again, thanks for reading my excessive post and please let me know if you have any thoughts or suggestions, if any of my inferences are wrong, etc. All help is much appreciated!

The first picture show the wooden stopper between the springs. You can see where it was painted over, we brought it out a bit. The second picture is the metal bar on the carriage that hits the springs. Seems “aftermarket” to me. Our taping paper on helped keep the carriage far enough forward so it was less likely to do that pivot that was causing the registration issue. 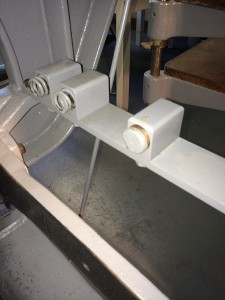 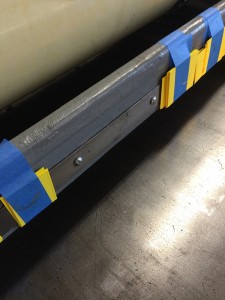