I’ve been talking to Fritz about this and he suggested reaching out to see if anyone else may have some measurements. My 219 OS has a wooden block acting as the carriage latch. Now that my press is properly leveled it’s clear that the wood has worn away and it’s no longer holding the carriage back at the feedboard. See the attched photos: 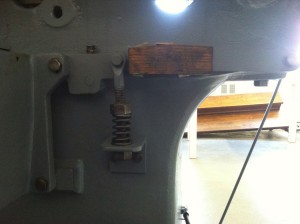 and the video posted here:

Dave Seat leveled the press while making other adjustments and that was when this problem became clear. Using masking tape to attach a small wooden shim solved the problem, but it was obviously a temporary solution. Recently that shim has compressed more and the whole thing wasn’t working, so I taped a bit of leading on, and it seems to work better. The linked video shows me moving the carriage while the wood block has both the wooden shim and a 2 pt lead.

But I’d like a more serious fix. Fritz doesn’t have a record of the carriage latch working like this and assumes that block was once steel. He doesn’t have a specs of such a piece. Do any other 219 OS owners have something similar? Or any other models using this technique? Ideally it would be great to get some measurements to try to make a new one.

Would adjusting the screw lift the wooden block enough to make it work? I haven’t messed with that because I don’t know what I’d be messing with! I’d also rather have a block with the right shape that would lift up and push the carriage back to the feed board the appropriate amount.

Any thoughts/info is much appreciated, thank you.