Here are two very large proof presses specially designed by R.O. Vandercook, and built by Chicago machinists Reichel & Drews, circa 1912–14. While neither press is known to exist today, they demonstrate that Vandercook was able to satisfy specific client requests early in his career as a manufacturer. 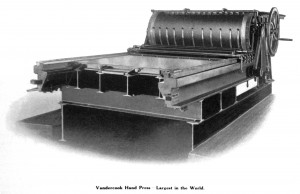 The illustration at left, accompanying an article in the June 1912 issue of The Inland Printer, represents a massive press custom-made for publisher R.R. Donnelley & Sons. Weighing ten tons, and  requiring  a 7 × 18 ft. floor space, its printing surface was  66 × 44″ bed. Note that the impression is made when the carriage travels to the left. The hand wheel is also off-center behind the impression cylinder. The inking assembly appears to be similar to the ink carriage style that was standard on Vandercook’s composing room cylinder series (Nos. 17, 25, etc.), The Donnelley archive (at the University of Chicago) makes no reference to Vandercook.

The photo at right, shown in the January 1914 issue of The Inland Printer,  is of “the largest hand offset and transfer press ever built” custom-made for Chicago firm, Goes Lithography Co. Weighing over 6000 lbs., it took a plate or stone 44 × 56″. Like Vandercook’s relief presses this one has a rigid bed and rolling carriage.

The article notes that the cylinder automatically trips at either end of its travel and also in the center of the bed at the will of its operator. The two beds have vertical adjustments to accommodate any thickness of plate or stone.

Notice the two hand cranks on the each side of the press, and like the Donnelley press, are off-center behind the cylinder. The article indicates that there were sheet gripers, but no mention was made of an inking assembly. However, it would have been like the ink carriage style described above. (Vandercook didn’t add an ink motor to its presses until 1925 when it introduced the 119 Proving Machine.)

Goes Lithography ordered this press after having installed a smaller  25 × 38″ version, which because of its precision and ease of operation, was used for short run production of intricate color work as well as customer proofs.