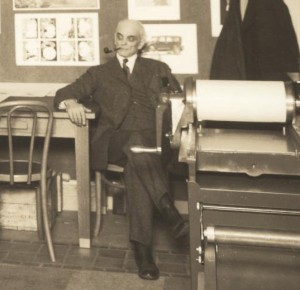 Robert Oatman Vandercook, (1866–1951), was the founder of the pre-press equipment company that bore his name. His interest in printing began when he was ten years old. It was claimed that in high school he built his first press on which he printed the school paper.* While a student at Northwestern University (class of 1888), he established the first university press. After graduating he managed the Evanston Press, a weekly newspaper known for its scoops regarding the Spanish-American War.

R.O. Vandercook held numerous patents. The first was for a “Means for Dissipating Static Electricity” in the pressroom. It was several years later that he turned his mind to redefining the means for the proving of type composition and photoengraving. In 1909, he began selling his first production model, the Trip Action Proof Press, featuring a geared impression cylinder that “rocks” over a horizontal, stationary press bed. He tirelessly promoted the advantages of his presses as the best method for reducing makeready time in short articles and letters to the editor in the pages of The Inland Printer. The industry welcomed the innovation and his company prospered. His three sons began working with him in 1918 and the company was incorporated as Vandercook & Sons.

After having positioned his flatbed cylinder proof press as essential composing room equipment and eliminating competitors, R.O. Vandercook fully retired by 1940. During WWII, the company, like so many others, retooled its plant to serve the war effort manufacturing parts for the 90 mm AA gun carriage, Norden bombsights, and radar assemblies. In appreciation, Vandercook & Sons was awarded the Army-Navy Production Award “E” in 1944. R.O. Vandercook, a proud patriot, attended the ceremony. In a letter to The New York Times that year he railed against the influence of special interest groups as being detrimental to the best interests of democracy. In 1951, he died of pneumonia after a prolonged unknown illness at age 84. He was survived by his wife of 58 years, Lue Emily Oatman (1872–1958),  his three sons, and a daughter, Frances (1894–1968).

Despite numerous photographs showing his gaunt face and ever-present pipe, R.O. Vandercook was athletic in his youth. At college, he lettered in football and was also a bicycle enthusiast. In 1892 he rode a “54 in. high wheel bicycle”:http://www.splendidpeasant.com/sp8870.htm through Yellowstone National Park, a journey heralded as the first made by a horseless vehicle. Twelve years, later he repeated the trek on a “safety” or ordinary bicycle. Vandercook was also headstrong. The Chicago Tribune reported in 1895 that he got into a “row” with members of The Evanston Press board of directors over ownership of the building. One director had the safe combination and door locks changed. Vandercook retaliated by hiring his own locksmith. As the work proceeded, a fight broke out resulting in a weekend spent in jail. However, Vandercook must have prevailed in civil court because he ran the paper until 1904.

Vandercook had a penchant for writing letters to the editor. The headline for a 1928 letter to The New York Times reads: “SUGGESTION FROM CHICAGO.| Gang Warfare, It is Held, Should Be Placed on a Paying Basis.” Vandercook wrote that he happened to be one of the crowd on the corner of Dearborn and Madison at the very moment when gangland gunfire erupted. Rather than providing details of the incident, he bemoans the indifference of gangsters to the safety of innocent bystanders. “I do not object at all if the gangsters enjoy killing each other, but do most emphatically object to be an unwilling bleacher spectator at their sport, though I would not object to having a safe ringside seat. Now here is a big idea. Revive the custom of dueling among gangsters. Let the city provide a stadium with bullet-proof seats. The gate receipts would surely be the biggest ever and the split would be large enough to make beer-running look like 30 cents.”

* Stephen O. Saxe, an authority on nineteenth-century presses says that 1876–1885 was the height of the amateur printing craze. And that there were a lot of second-hand amateur presses around at that time. “… if you discard the usual image of a press and instead allow for some kind of contraption that can produce an impression, it’s possible …. think in terms of springs, boards, and hinges.”