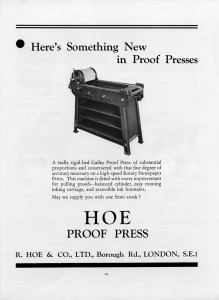 Here’s a vintage full page advertisement for a Hoe flatbed cylinder proof press from The British Printer, January-February 1933 (vol. XLV, no. 269, page 49). Hoe & Co. Ltd. was the London subsidiary of the New York printing equipment manufacturer R. Hoe & Co. Established in 1827, the parent company is remembered for their Washington-style iron handpress, but eventually build large production cylinder presses. I have not seen an equivalent ad in The Inland Printer and this proof press is not mentioned in Frank E. Comparato’s comprehensive history of the firm Chronicles of Genius and Folly (1979). I am not aware of any existing examples in the UK or US. 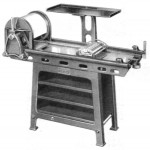 With its straight pull handle and separate inking carriage it looks very similar to the Vandercook 20 and the 21 Roller Series Proof Presses (1915-38) of which there are six examples listed in the Vandercook census. So, for Hoe to say it’s something new in 1933 is pure marketing.

Interestingly, the recto of the BP advertisement consists of a full page ad for “Gem” printing equipment, including an adjustable bed cylinder proof press. Another machine of which little information has come to light.