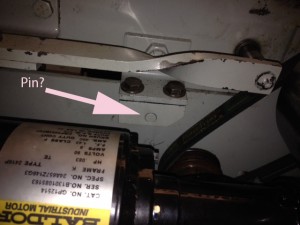 The oscillating roller on one of our SP-15 presses began hesitating this week, out of the blue, just like the video posted in January. For that poster, it seemed the solution was a new belt. However, both the motor and belt on our press are relatively new, so I figured that might not be the solution for us. Our motor was completely replaced a couple of years ago (I blogged about it here), and the pulley now uses a V belt. I double checked the belt today and found it had worn loose and was slipping; it was also out of alignment with the drum cylinder. There are rubber shavings where the belt has worn against the pulley, maybe because it is out of alignment. We were able to get it back into alignment fairly easily, but the belt is still loose. When the new motor was installed, it was not the same shape as the old one, and had to be mounted to the base a different way. They did not put in slots so that the motor can be moved slightly to take up slack in the belt. My machine shop neighbor (how handy is that?) has told me that if he can remove the bottom of that well where the motor lives, he can drill slots for us. He thinks that he can remove this “well” by releasing a pin (see photo) on either side. Is that doable? I also figured to replace the V belt with a gear belt, which is what is in our other SP-15 which seems to have the original motor/drive system. A quicker solution might be to get a slightly smaller belt, but I would prefer a longer-term fix, if possible.