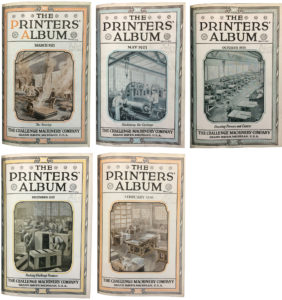 The Printers’ Album was the house organ of the Challenge Machinery Company. It featured articles on the business of printing, equipment manufacturing, production tips and tricks, and display ads for Challenge products. The five covers that are shown here from 1925–26 are among the best and illustrate some of their manufacturing processes.

The magazine began as The Electrotyper in 1873 at editor Jame L. Lee’s previous company Shniedewend & Lee and where he later lengthened the name to The Printers’ Album and the Electrotyper. After establishing Challenge, Lee simplified the title to The Printers’ Album which ran until 1908. Twelve years later, it was revived by his son, and succeeding president, J. Edgar Lee. Printed in two colors and 16 pages, the first issue of the new series is dated December 1921/January 1922 and the last issue is dated December 1931/January 1932.* Unfortunately, the magazine ended just as Challenge bought the Potter and Poco brands of proof presses from Hacker Manufacturing and before launching their C, E, and K series proof presses.

*In a reply letter to Henry L. Bullen, Librarian at the American Type Founders Co., dated March 1, 1926, the magazine’s advertising manager explains that “we published from four to five issues a year, sending out part of an issue with a certain month dating, then simply changing the month and sending another lot to a different State, the only difference being in the monthly date line on the cover and on page 5.”