I am having problems with the electrical system on my Universal IV and need advice!  The cover was off the electrical control box as the carriage has not been breaking consistently on the feed board end for the last couple runs, but it was usable. Recently, when I flipped the press on, I saw a few sparks out of the corner of my eye come from the electrical box, and now it is really broken!  No scorching or evidence is visible, but now the carriage does not respond to any of the user controls. It does not matter what mode the press is set to (Manual, Cycle), no response. When I flip the on switch, the pilot light comes on, and the ink drum motor runs, but nothing else. Engaging the limit switches on the back side of the press by hand seems to activate the corresponding relays as expected. If I engage (push in) the forward or reverse “reversing switches” in the electrical box with a wooden stick, the carriage moves, but still no response from any of the user controls. Manually moving the carriage to the center of the bed, there is still no response from the “manual control lever” forward or reverse.  It is as if everything is working, but the user controls are not connected. 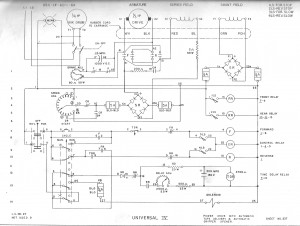 The local electrician has worked on the press before, but it is way out of his comfort zone, so if anyone has any ideas that would be a big help. Below is the electrical diagram, and a video I took of the electrical box back when it was actually behaving. I know the Universal IV is a rare press, and the electrical system is not exactly the same as the smaller Universals, but any suggestions would be much appreciated. Likewise, I am in the Finger Lakes Region of New York State, so if anyone happens to know of an electrician out here who might be able to help, please let me know.