Andrew Franklin Wanner (1855–1935) was a typefounder and the proprietor of A.F. Wanner & Co. a printing supplier and press manufacturer in Chicago. Today the company is remembered as the original maker of Potter and Poco proof presses. It was also one of the earliest selling agents for Vandercook.

In 1867, Wanner moved to Chicago with his family from LaPorte, Indiana, and worked in a printing supply. One account claims that he furnished some of the type that enabled the Tribune to resume printing after the Great Fire. His acumen led to his partnership in Mechanics Type Foundry (1872–1883). After its dissolution, Wanner and another partner formed Union Type Foundry (1883–1892). Upon its consolidation into American Type Founders, he returned to the supply business he had established several years prior.

In 1902, the business was renamed Brower-Wanner Co. when he was joined by inventor and ATF secretary A.T.H. Brower (1850–1924). This venture lasted only a year. Brower later developed his own reciprocating bed cylinder proof press at about the same time A.F. Wanner & Co. introduced the Potter and Poco brands. 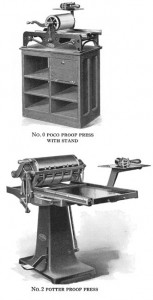 Wanner retired from management in 1911, but spun off the rebuilt machinery department as a new business called Wanner Machinery. An announcement in the December Inland Printer noted that “the specialties controlled by A.F. Wanner & Co. such as Potter proof presses will be brought to the attention of printers more attractively and vigorously if possible than ever before under the new management. The president of the company is Mr. N.W. Hacker and the treasurer H.W. Hacker.”

H.W. Hacker’s name is significant, because some Poco and Potter presses found today bear nameplates stating “Manufactured by Horace Hacker & Co.” or “Hacker Manufacturing.” The reason is made clear in the April 1914 issue of The Inland Printer where it was announced that A.F. Wanner & Co. changed its name to Horace Hacker and Company. “The business remains under the same ownership, management and legal status as before, the name, only, having been changed. The company was established thirty-nine years ago by A.F. Wanner, and has continuously been in business as a printers’ supply house, typefoundry and manufactory. The present ownership dates from October, 1910.

“The company manufactures the line of Potter proof presses, and the Wilson patent book-block, both of which have long since established their efficiency and value for printers. Recently, the Poco proof press was brought out as an inexpensive machine of the modern type, and it has found a wide field. Last summer the company installed a complete new manufacturing plant in Chicago, so that it could readily improve the quality and variety of its product, and be of greater service to the printing trade.”

Thus we have the origin of the Hacker company, a firm that was dedicated to pressroom efficiency by making plate gauges and precision proof presses on the principle of the stationary carriage and reciprocating bed. It produced the first engraver’s test press—two years before Vandercook.

* Challenge had long been in the press building business with its simple galley proof press, Challenge-Gordon platens, and also its Lee production cylinders, but up to the point the did not have a machine to directly compete with Vandercook and Hacker.