I have a friend who has an SP15. She was having trouble getting the inking smooth and I stopped over to see if I could figure it out. Turned out that the roller and the drive gear were acting independently of each other.  Once it was printing the gear that should drive the form roller was slipping (generally speaking it was rolling but the roller itself was just sliding across the surface of the type). I came back and looked at our SP15 which was the same way, but the rubber of the roller on ours was locked to the gear. On hers you could rotate the gear quite easily.

One difference in our rollers is that the rubber end on hers is cut off square and on ours it is tapered as you can see in the photo below.

We suggested making a washer out of a non-stick sheet to see if she could get more pressure between the roller and the gear. That at least worked to reduce most of the slur she was getting.

Can anyone explain how this should work? Is there a way to essentially glue the rubber to the gear or do you not want to do that? 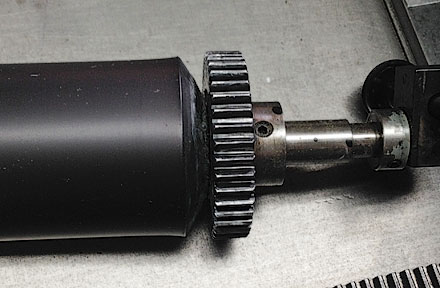