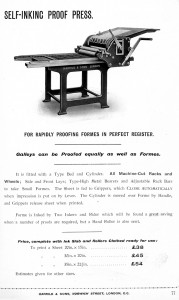 While looking for information on proof presses built by Harrild & Sons, better known for its iron hand presses, I asked Stephen O. Saxe, author of American Iron Hand Presses, what he knew about this British firm. In reply he scanned this page from a 1906 Harrild catalog, shown at left. This press features a rigid bed and rolling carriage with cylinder grippers and an inking assembly. This is surprising because it is far more advanced than Vandercook’s first model, the Rocker, built in 1909, and that they didn’t make a comparable machine until the Composing Room Cylinder series in about 1918. Based on this image, it appears that Harrild was the originator of the modern proof press, despite Vandercook’s repeated claim in its advertising.

Having said this, it seems likely that R.O. Vandercook developed his press independently for two reasons. First, because his intent was to make production cylinder presses until a potential customer, after seeing the prototype, suggested he sell it as a proof press. Secondly, there were enough American printing equipment manufacturers in the first decade of the 20th century that foreign firms had little incentive to enter the U.S. market. Therefore it’s doubtful that Vandercook saw a Harrild catalog, let alone this press. Saxe concurs adding that he is unaware of any Harrild advertisements in the Inland Printer.

Perhaps Harrild ads appeared in Canadian Printer and thus a few Harrild proof presses may be located in Canada. (I’ve seen just one, here in the U.S.: the much simpler “Pullman” model at Brown University, but don’t know its provenance.) Having no access to Harrild catalogs or issues of British Printer, I invite anyone who does to comment or post any relevant information they find. Please note that I do own a copy of the British Printer catalog Specification Manual of Printing Machinery (1961) in which later Harrild proof presses, Vandercooks and the built under license Western 4 and 219 proof presses are shown.

The image shown at right is an assemblage of early flatbed cylinder proof preses advertised in Barnharts Big Blue Book (BB&S, c. 1896) that R.O. Vandercook is likely to have seen, perhaps in a Chicago printing office, as he was retooling his prototype. Remember that Vandercook patented his design and that all competing American-made proof presses (Brower, Claybourn, Challenge, Hacker, Poco, Potter, Wesel) featured reciprocating beds with stationary carriages. A British press much like the Poco, by Soldan Ltd., c. 1900. is shown in James Moran’s Printing Presses (1973). (Of course, the idea of rotating a heavy cylinder to slide a bed on rails was used by 15th century printmakers. To write about the reciprocating bed as it relates to hand presses would veer off topic and show my ignorance.)

I believe Nolan Corp was the first American company to make a proof press based on the Vandercook principle followed by Challenge and Reprex. From the beginning Vandercook outsold its domestic competition and was exporting presses into Britain and continental Europe by the late 1920s.

7 thoughts on “Origin of the modern proof press reconsidered”