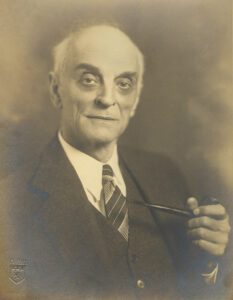 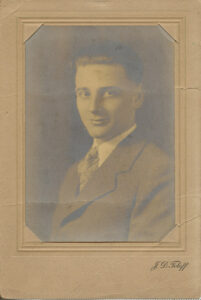 Recently, I acquired some Vandercook materials that had belonged to David Dodge Vandercook (1901–1975), who was Vice President of Engineering and Board Secretary for Vandercook & Sons. He was the second son of company founder Robert O. Vandercook (1866–1951).

The company frequently used the portrait of R.O. Vandercook (above left) in promotional literature, but apparently, this was one of the prints made for the family. Note the embossed logo in the lower-left corner for The Moffett Studio, a notable photography firm in Chicago, ca. 1905–59.

Considering its provenance and comparing it to known photographs, I’m confident that the portrait, above right, is of D.D. Vandercook. It does not appear in any available company literature or trade journal article. The mat states it was made by J.D. Toloff, a premier photographer in Evanston, ca. 1913–55. On the reverse, in pencil, is written “Fall 1925.”