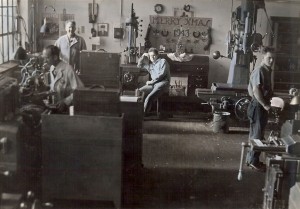 James Burton Roozee (1918-1998) joined Vandercook & Sons in 1940 and eventually became its last Director of Engineering. Self taught and interested in all things mechanical and electronic, his name appears on several U.S. Patents including the “quick change” form rollers, ink monitor and automatic wash up unit for the Universal and SP series presses. He is also responsible for the RO4-29 Four Color Offset Press, one of Vandercook & Sons last models before the company was sold to Illinois Tool Works. When Vandercook was sold again, Mr. Roozee became the supervisor of maintenance, sheet metal shop and the training department for ITW subsidiary Ilitron, who made gear testing equipment for the auto industry. Ilitron moved in before Vandercook was shutdown, then took over the entire factory.

Top left: A young Burt Roozee, center, in the Vandercook tool room, 1943, Below left: a drawing of the RO4-29 for the first draft to the patent attorneys. Below right: Roozee, with the R04-29, circa 1965. Images courtesy of James Roozee who donated his father’s Vandercook archive, which includes rare promotional materials. Some of these items will be posted as time allows. 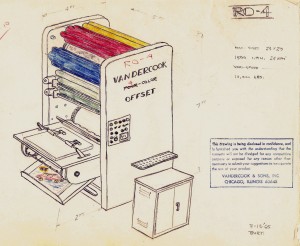 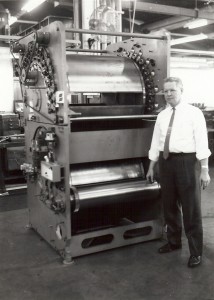