Approximately 6 years ago I took delivery of a proof press that remained in storage (in bits) until November 2010, when it was dragged kicking and screaming out of hibernation and pieced back together using the only picture I had. The picture showed the press assembled and in situ where it had come from it’s previous owners (who I believe were printmakers).

It was fairly easy to work out where most parts went, but the press is missing a few parts and it doesn’t ‘work’.

I contacted Paul Moxon and asked if it would be possible to post this up on the Vandercook site (he agreed, thanks Paul!) to see if anyone could help identify the press as there are no markings/serial numbers on it, having already searched the site to see if anything looked vaguely similar. Given the size of the press I assumed it was British made. I couldn’t find anything. But one night whilst looking at the Vandercook site again I literally stumbled across my press…

The first picture here, looks very similar and is incredibly useful as all the parts are labelled. But further digging here, tells me that my  press is a ‘Type A’. I am unsure if this dates it to 1904?

According to the literature, the type A can operate at three speeds. I’m not sure how as there are only two ways to ‘crank’ the press, one on the cylinder itself and the other on the smaller wheel to the rear of the press. This smaller wheel is attached to a cogged shaft that runs the width of the press. Where there should be four ‘shells’ that the shaft rotates on/in there is now only one. I can’t remember if the press came with the other three or they have gone awol.

The main issue with the press is travel. The cylinder and inking assembly will not budge when cranked. I’ve never used a Vandercook or Korrex but the videos I’ve seen show that the cranking action is smooth and easy. I’ve cleaned the press up and oiled the parts that look like they needed oiling, but this has made no difference. Before we attached the cylinder, the whole assembly would move if given a good shove. Do other cylinders rotate on an internal bearing? I ask because it looks like there could be a bearing on the main shaft. Which may be the cause of the problem.

The rollers appear to be made of wood and have long since passed their prime, both have an almighty crack running along their length. I’m sure recovering will cost a small fortune, so using inking up using a brayer would appear to be the sensible option.

On the operator side of the cylinder is a little mechanism that is attached to the cylinder grippers. This appears to link up with the impression handle. Not entirely sure how it would work but I assume you would feed, grip and then crank to print. There is a large pin that joins the handle to the feed board that is missing (labeled).

So…does anyone have any experience with this press? Is there anyone that has a video of it working (??!). I should add that I am in the UK (West Yorkshire).

The last picture shows the press fully assembled at the previous owners before I got my grubby hands on it. Under the press are the rollers. 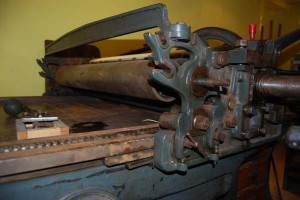 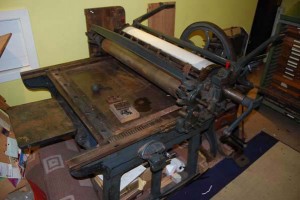 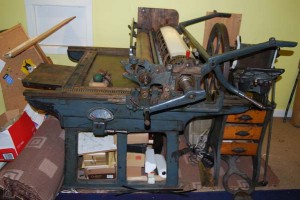 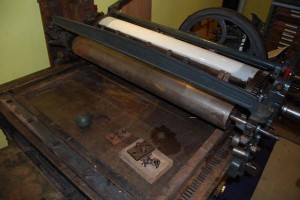 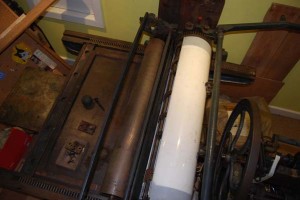 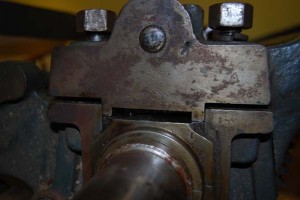 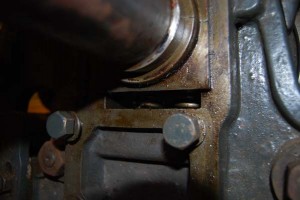 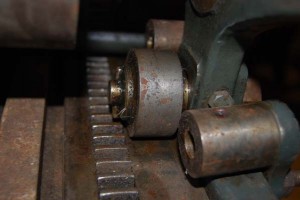 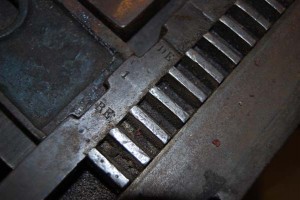 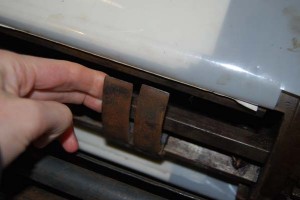 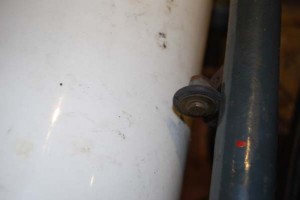 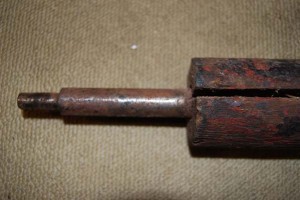 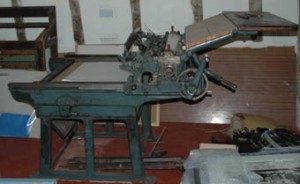