Hello everyone! Looking for some advice on how to proceed, I don’t want to do anything irresponsible here.

I had a recent plumbing mishap above my in-home studio which deposited some light debris onto my Uni III AB. After a particularly thorough and careful cleaning of the press, I noticed some problems.

In the process of cleaning out some hard black ink left by a previous owner between the bearer rail and the cylinder rack I found that three of the screws holding the rack in place spun freely and were removable with a magnet. I realized that the rack, having now been cleaned of the gunk that was holding it steady, could rock and wiggle.

I removed the rack and saw that two of the shoulder screws (X-17602?) were broken off mid-way. It looks like someone went in after them with an extractor and failed to get the broken fragments out and completely stripped the threads on both holes in the process. These screws were then dropped back into their holes and I never noticed they were loose, to my embarrassment, as they were stuck in there with the ink (I only kept dust and grime out of the rack, I never had a reason to go to town with solvent). One further hole is almost totally stripped, there is some thread left at the very bottom. The hole nearest the (floating rack?) is good as is the spring. There were no shims under the rack.

So here I am. I think the move is to drill out the 3 stripped holes (2 with stuck material) and tap them to accept helicoils or some other thread repair, then order 2 replacement screws from NA Graphics or an equivalent from McMaster-Carr. Then re-assemble and go from there. Is that the correct course? I am cooling my jets looking for some expert opinions and am open to ideas, especially considering my experience is limited, and I don’t want to make matters worse. I appreciate anyone taking the time to read this novella. 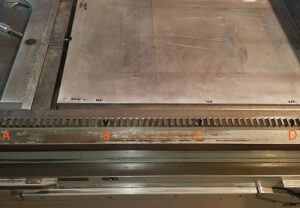 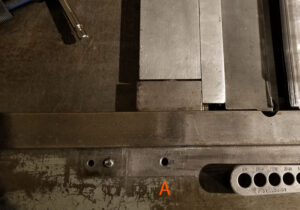 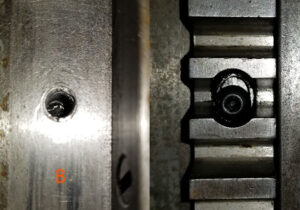 I was finally able to take the weekend to work on the thread repairs as well as even further deep cleaning. The extent of the gypsum/insulation/water mess led to clogged oil holes, detritus in hard to reach places and also some light rust that had to be addressed. Thread repair went well, and the rack can slide correctly and wiggles side-to-side very very little now. Took a few photos but apparently none with the actual coils in place…

In the end I used EZ Coil inserts specifically 10-24 2D .38″ dabbed a bit with blue Loctite to help them not back out. The hole at the end with a bit of thread in it (A) didn’t work out so I used an insert there too since the others had gone so well.

Hole (B) I wound up using a socket cap screw and making a collar/spacer for it out of a cut length of steel screw-post that was the perfect diameter.

Hole (C) had taken a beating, it was very oblong (I was going to use a pin but it wiggled too much) and had something stuck in the bottom, I tried to extract it and failing that used a punch and chisel to remove some of the broken matter which turned out to be part of a tap stuck in there. Not wanting to contend with trying to extract a tap, I drilled the hole round/tapped it as far down as I could and used one of the broken screws after cutting the end flat and using a die to clean it up  (between 1/4″ and 3/8″ length left). I wound up using an insert there.

(D) was just fine. So hopefully that’s that. Thank you again for all the help and for bearing with me.

In the process of doing all this I wound up having other burning questions, I will make a separate post.

If the remaining threads don’t properly align a roll-pin from bearer to rack, I wonder if the right taper-pin would work.

I think you’ve got it. A spacer might help. Good luck. Take photos!

Thanks for the response, much appreciated

There doesn’t “seem” to be enough thread in the last hole to hold the rack, I’ll see if I even get a full turn. Blue loctite is a good idea might make a big difference. I’ll give it a whirl before going crazy with heli-coils, I really don’t want to use a tap if I don’t have to.

So, if I understand correctly, assuming I can get the rack screwed down on both ends (good hole and partially threaded hole) I could just use roll pins in the two existing middle holes? I assume I would use a metal spacer around the top of the pin to account for the collar on the absent screw?

If I got that straight, then it’s a much less involved fix, and I wouldn’t have to trouble Fritz over replacement screws.

Thank you both, I will update after I take a crack at it this weekend.

Yeah, if you can locate one screw exactly, you might use roll pins in other places.

Is there enough thread in the one hole to hold the rack? If so, it along with the good screw and hole might be enough to hold the rack steady. You could apply Loctite to the screw
If your helicoils don’t align exactly with the rack you’ll need ream out the rack holes. But that shouldn’t be a problem. Please keep us updated.