Hi – I have my (early) Universal III up and running and it’s printing very well and all is great except for the paper release/gripper problem at the end of the bed. I posted on this awhile ago and have been tinkering with the problem on and off ever since and still no luck. I have to yank the paper out of the grippers. Here’s what I’ve done so far:

– cleaned and lubricated the gripper bar assembly. The grippers work fine when lifted with the pedal.

– removed, cleaned and re-attached the trip lever – it seems like it’s in good shape (photo)

– placed a thin shim behind the gripper cam (photo)

I took measurements on how far the push rod goes in at two locations. At the feedboard, using the pedal, the rod pushes in about 1/2″ more than at the end of the bed.

I’m hesitant to add another shim behind the wedge without further advice.

Hoping for some suggestions. Thank you! 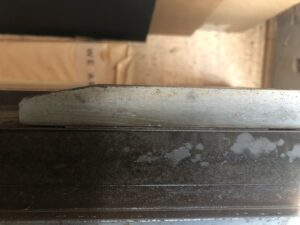 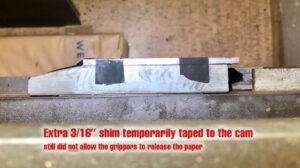 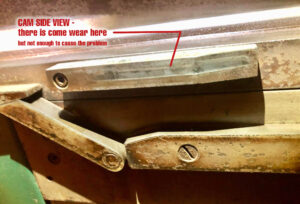 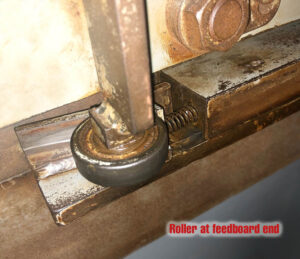 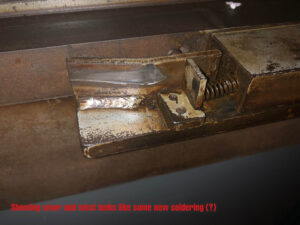 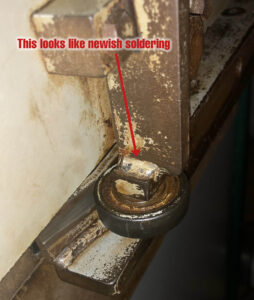 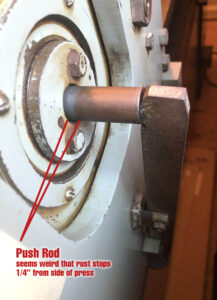 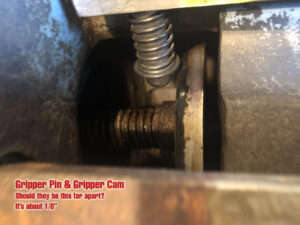 Ellie, Not sure if this is resolved but I had a very similar problem at the beginning of summer with my late model Uni III, not sure my experience will be helpful, here goes:

In my case the problem was A) excessive wear due to the sharp angle that the MR-68 Roller was meeting the opener cam. B) the looseness of the cam itself because of the slugs I had put behind it, plus Accu-Shim steel tape I put on the front of the cam. C) Lack of proper lubrication and adjustment of the gripper stems played a role too.

Slo-mo videos of the follower engaging with the cam revealed that, in my case, I was damaging my cam follower/roller, bending the pin it rotates on slightly, possibly because of the repeated hard impact on the forward corner of the cam. This was also making the gouge on the surface of the cam much worse. The roller itself had worn well out of spec particularly the edge, so:

I re-adjusted the fulcrum (WD-40 Specialist Rust Penetrant was liquid gold here, the nut had seized) so that the face of the roller and not the bottom edge would meet the cam.

I had a machine shop fill the gouge in the cam, as suggested here. They also straightened out damaged split shanks that hold the cam on so it would sit firmly and stop trying to fall out/rock/wobble. They also removed the roller and flipped over it so that the less-worn edge was contacting the cam.

Removed the steel tape whose edge was cutting into the cam follower, and the slugs-as-shims behind the opener cam.

In the photo figure (B) are nuts/threaded pins that control how high each gripper stands up when the push rod uh, pushes. Mine were too low, and adjusting them seemed to make up for the shims I removed under the cam. However if the pins were adjusted too far up, the grippers wouldn’t close enough to grip thin stock tightly or prevent dust from sneaking under the gripper heads so I adjusted while the assembly was attached so I could test each gripper with scrap of onionskin for a firm grip. This was a pain.

Eric here had a tip to polish the gripper stems with graphite flakes, however I could not access the stems I had to settle for carefully blown in graphite while the assembly was off the press, but it made a difference.

Fritz did not have a replacement for the worn MR-68 so I was prepared to replace the shims if necessary with the understanding that I would likely be exacerbating the problem in the long run but thankfully the grippers open smoothly and high at the end of the stroke now.

Hope something in there is helpful :) good luck.

Hi Ellie, I’ve been following along since my SP-20 has a similar issue at the end of the bed. If WD-40 isn’t enough to loosen that fulcrum nut, try PB Blaster and let it sit a bit. It smells horrible and is best used in a well-ventilated area, but it really cuts through rust and crud. Penetrating oil also may work on heavily fixed parts. WD40 wasn’t enough when I was working on a heavily rusted press a few years ago. Good luck.

Thank you Dan for the suggestion with adjusting the fulcrum. I have removed the trip lever and see that the part it attaches to is threaded (photo). I assume that I need to screw that in (or out) to adjust the gripper action. And I assume that the nut holding it to the press is the lock nut that needs to be loosen in order to make the adjustment, right? That thing is not budging despite generous quantities of WD-40. Please let me know if I understand this correctly and I see I can get some muscle on that nut.

Also, thanks Paul for the suggestion to check the push rod and spring in the cylinder. It looks inserted correctly and feels secure. I’ve attached a photo of that as well in case I’m overlooking something.

Ellie: I agree that it’s absurd. Dan’s suggestion, is one I overlooked. Are you certain that the push rod and spring are inserted into the hole in the cylinder on the operator’s side?

Have you tried adjusting the fulcrum point? You will have to remove the X-17151 trip lever and loosen the lock nut in order to turn it. Changing the fulcrum position gives you more or less gripper action. It might take some trial and error to get it right.

I took your advice and secured my 3/16” shim behind the opener cam and it worked! (I think when I had it taped before, it was shifting). But I have a few concerns about this:

– It seems absurd that such a large shim should be necessary and I’m wondering if there isn’t another issue. Especially since the automatic gripper release at the feedboard isn’t working. The two problems feel related.

– Also, the leading edge of the opener cam, where the roller meets it, now sits about .75” away from the side of the press. The roller sort of smacks into it instead of rising smoothly. Do you have any suggestions on how to improve this set-up? Or will it be OK to leave it?

Regarding the automatic gripper assembly: I’ve checked the condition of the spring and behind the latch and gave it a bit of extra lubrication. It seems fine, but still no gripper lift as they approach the feedboard on the return. They only lift when the pedal is pushed. I’ll keep working on it, but please let me know if you have any further suggestions with this issue.

Re: lock pin. have you checked that the condition of the spring and behind the latch. .

Re: soldering. I doubt that it isn’t original. It’s probably shiny from contact with the cam follower. The parts look to be original as well.

Re: opener cam. If you replace the screw with a longer one you could add more shims.

Re: push rod. Sheet 211 of the manual shows that the gripper lever leans slight outward with the carriage is in the middle of the bed.

Thanks Paul – I have not tried the aluminum tape since it doesn’t seem thick enough to solve the problem. In fact, I tried adding a 3/16″ shim (photo) to see if that would lift the grippers enough and still no. Eric – I would be interested to know how thick your aluminum shoe is.

No, this press does not have two trip wedges.

Another thing I didn’t mention before was that the missing knurl pin (which had been sheared off and not yet replaced) does not effect gripper operation. With it removed, the gripper opener should automatically open the grippers as the cylinder nears the feed board. But it does not. I must always use the pedal to lift the grippers.

I’ve noticed what looks like newish soldering where the roller attaches to the trip lever, not sure what to make of that. Do the trip lever and roller look like factory parts?

I am providing a number of additional photos (in the original post) as requested. Hoping you can spot something I’ve missed. Thank you!

My old SP-20 came with an aluminum shoe that slid on to the original flange, increasing the width enough to open the grippers fully.

Pleased to see your checklist as you work through this problem.

Did you apply a metal-faced adhesive tape to the outer edge of the cam as I suggested in February of 2021: https://vandercookpress.info/knurl-pin-sheered-off/#comments

Another thought: Does this press hav two trip wedges on the end of the press? If so then the cam may be in the wrong position. Please post another pic.